M.U.R.S (translated as walls) illustrates the most prominent features of the cities of the future, the smartcities.  Technology has distanced us from culture, it has dehumanized us and alienated us from pain. Ultimately any of us are potential repressors and repressed. In the cities of the future, everything seems digitally controlled. That is what you could see in M.U.R.S by La Fura dels Baus a show premmiered in 2014 at Montjüic Castle. The performance take place in four areas and each illustrate a city of the future.

The audience must download M.U.R.S app, fist iteration of Kalliópê, which therefore is the mechanism to be inform and misinform. The smartphone of the audience became another actor and allows the interaction of the audience within the scenes. To conceive the show, members of La Fura have had the collaboration of academic institutions ranging from the Massachusetts Institute of Technology (MIT) and the Futurelab del Institut Ars Electronica de Linz  (Austria) to the department of Open Systems of the Universitat de Barcelona and Universitat Rovira i Virgili, through the studio of TigreLab and Creativitat i Innovació de l’ICUB (Barcelona LAB).

M.U.R.S has been on tour in cities such as Barcelona, París, Seoul or Rio de Janeiro.

At the beginning of the show, the audience was divided into colours. 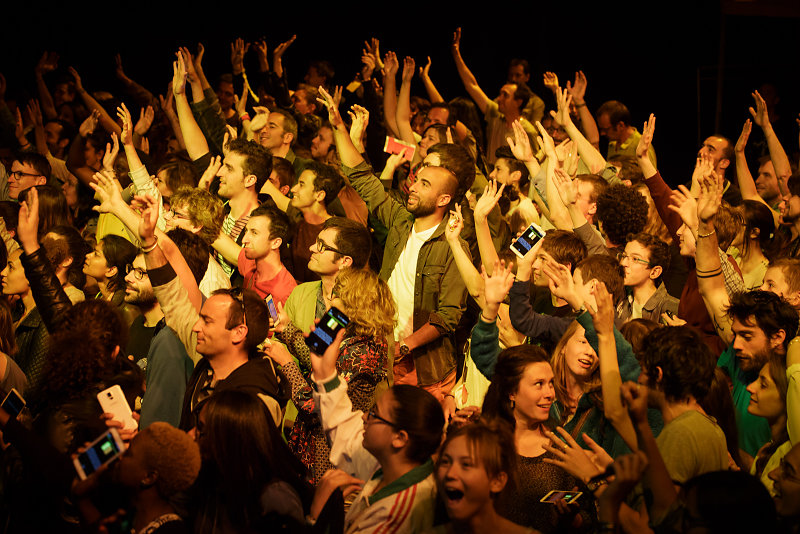 Audience in the yellow space playing during the show